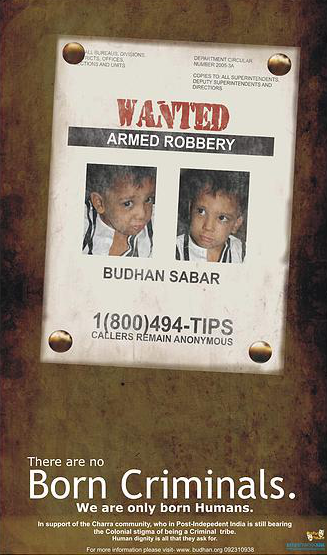 A population of some 60 million “denotified tribes” can be found throughout India today. Since 1998, the Budhan Theatre (http://www.budhantheatre.org/) has performed street plays to raise awareness about the condition of such tribes. They work to bring about social change by raising awareness of the historical plight of Denotified Tribes, notably the Chhara community, which has faced the physical, social, and psychological stigma of being “born criminals”.  The theatre group uses the talents of the Chharas as natural performers to conduct expressionist theatre that emphasizes these unique issues.  Highlighting the countless challenges faced by the Chhara community and spreading our creativity throughout India, the Budhan Theatre debunks the numerous prejudices against denotified Tribes to bring them closer to the kind of life guaranteed by the Indian Constitution. 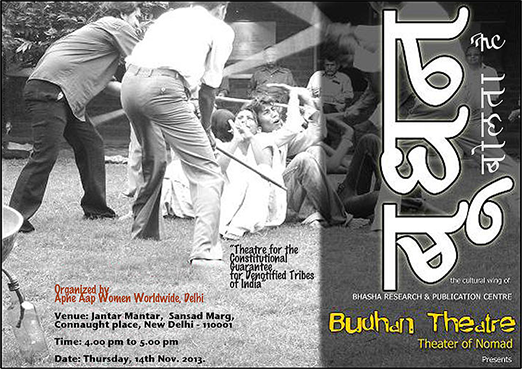 Historically, Chharas comprised a group of nomadic people in India.  When the British attempted to maintain the colonial regime in India, they utilized theories of crime being hereditary to undermine these nomadic communities as criminal.  In 1871, the Criminal Tribes Act made legal the enforcement of restriction and harsh punishment for members of criminal tribes, punishments quite distinct from other non-criminal tribe members.  In 1959, the Habitual Offenders Act replaced the CTA, and while there was discussion of rehabilitative processes for tribes known as criminal, this act only further allowed police the opportunity to identify these groups, target them, and further marginalize them.  This act remains in practice today, and so, rather than have any protection by the government, there is no guarantee that members of these groups, known as Denotified Tribes (DNTs) will receive jobs or education, often forcing them into illegal practices such as liquor brewing in the dry state of Gujarat.  The theory that people can inherit innate criminality has withstood the test of time and despite the revocation of the CTA, formerly nomadic peoples and current DNTs are considered criminal by nature and have been unofficially deemed second-class citizens.  The formerly nomadic Chharas are known by other names throughout the country, including Sansis, Kanjar, Kanjarbhat, and Adodiyas.

Acting like a Thief: Documentary about Chharas in Ahmedabad

Budhan Theatre was founded by G.N. Devy, a literary critic, linguistic, and tribal activist based in Baroda.  He continues to inspire Chhara youth in the rights-based movement through arts and literature, and guides the social movement for the constitutional guarantees owed to Denotified and Nomadic Tribes.

Performing Our Past, Changing Our Future

Budhan Theatre actors have been actively engaged at the state and central level policymaking processes for the constitutional and cultural rights of DNTs.  They have spoken and appeared at hundreds of conferences and seminars organized by various state and national institutions, including police academies, arts organizations, policy-making organizations, and universities.  Budhan Theatre has also performed at conferences to provide audiences the true experience of the DNT plight and initiate dialogue between society, system, and DNT communities. 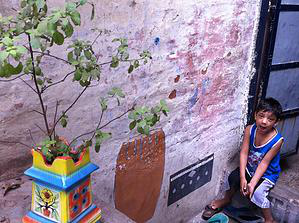 The library was established in 1998 by G.N. Devy and Mahasweta Devi as a centre for the community development for the Chhara tribe.  The library includes books in English, Hindi and Gujarati, and the readers are members of the Chhara community, police officers, and neighbouring communities’ youth and children. The library was the birthplace of Budhan Theatre, and it remains a vibrant place for the youth of Chharanagar, where young people come together to interact, read, practice music, perform theatre, dance, and engage in other community building activities.